“The theater has a thousand faces, it’s at the same time reality and fantasy, contemporaneity and history, includes time not in the form of facts or figures, rather interprets it in images of, mythologies, feelings and meanings. This is the reason for being of the theater and the same thing can be said for life.” (B. Yuchananov)

The Calatafimi Segesta Dionysiache Festival has relaunched for four years the culture of outdoor theater in the splendid scenery of the ancient theater of Segesta, he is the natural heir of a cultural tradition that began in 1967 when the National Institute of Ancient Drama chose this magical place as a stage to interpret the Peace of Aristophanes directed by Arnoldo Foà, anticipated a few years earlier (1957) by the representation of Euripides’ Ifigenia in Aulis at the Temple.

In more than fifty years of programming the connection with the classical theater has always remained fundamental.

In Western culture, the Greek Theater is an icon and symbol of social aggregation, politics, but also of passion and catharsis (purification), in the sign of Dionysus, the deity to whom the Dionysiacs were dedicated, festival during which the theater ritual had its privileged space. The Dionysiacs of Segesta are blossom from these origins and evolve in our theatrical tradition.

The Calatafimi Segesta Dionysiache Festival doesn’t privilege only the spectacular dimension of the theatrical performance but it’s a moment of aggregation, sharing and integration.

The artistic direction of the Dionysiache Festival, entrusted at the director Nicasio Anzelmo, devised the whole event as a complex and overall reflection on the theater and,consequently,on today’s society, marked by a deep-seated individualism that subordinates every opportunity of dialogue.

The choice of the myth is the main theme that supports the selection of the works to be represented: from Greek and Latin classics to Shakespeare and Ionesco, at the Theater of the Absurd.

Through a reinterpretation of the myth was based a prestigious collaboration with the CENDIC, International Center of Contemporary Dramaturgy. that will reward the best drama deriving from the re-reading of classical myths and their staging through the Cendic Award.

The winning work will be represented in the next edition of the Festival.

For this reason the Festival includes musical concerts, dance, animations, exhibitions and conferences that take place in Segesta and in Calatafimi, to spread the culture of the theater and and putting the community at the center of every job. Since 2017 the Calatafimi Segesta Dionisiache Festival has had the merit of relaunching the study and research activity on the theater through the stipulation of a memorandum of understanding with the University of Palermo, the Department of Humanities and the Archaeological Park of Segesta Festival “Dionisiache” and the establishment of the Segesta Project: international center of studies on ancient theater, coordinated by professor Giusto Picone and that already in the spring of 2018 has carried out a series of seminars entitled “The Faces of Medea” in the course of which emerged contributions that will be published in the journal Dionysus ex machina. Among the programs of the Study Center there is an international conference and a theatrical staging of the Medea of Seneca, of Medea of Euripides and of a contemporary Medea, in the edition of Calatafimi Segesta Festival Dionisiache 2019.

Segesta is therefore the magical place where ancient archetypes still have the power to determine and influence our life from the depths, feeding on the memory of its stones full of humanity. These same stones that overlooking the Mediterranean and have inspired the great masters of the Theater, pushing them to stage the highest feelings and still today clamouring that “The Theater is the desperate effort of man to make sense of life” (Edoardo De Filippo). 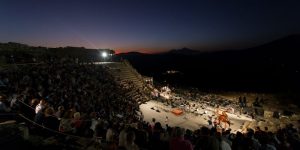 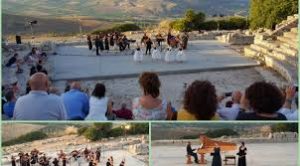 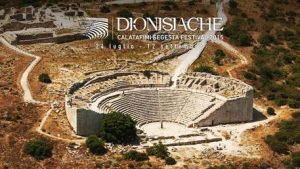 Hi I introduce myself